Motorcycle Accident Claim? Have us in your corner! 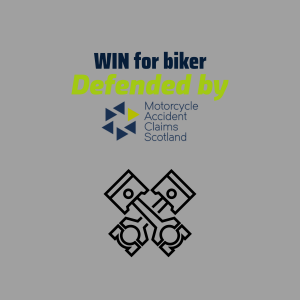 A solicitor from Motorcycle Accident Claims Scotland (MACS) has successfully defended a motorcyclist.
Our client was the subject of a damages action brought by a motorist.
Nobody likes to think that they will ever be in this position, but as you can see in this case, it’s prudent to have adequate legal cover.
Even when matters are complex, having very experienced support will pay dividends.

The case relates to a collision between a car and bike which took place in Linlithgow in July 2018. It was alleged by the driver that the biker had strayed across the line of a sharp bend.
Those involved in this case were our client and biker David Cochrane and driver Amy Cockburn.

This judgement was released following the recent hearing at the All Scotland Sheriff Personal Injury Court. Sheriff Braid found that Mr Cochrane was not at fault for the collision and therefore his insurer would not be liable to pay damages to Ms Cockburn.
In his judgement Sheriff Braid said he found Mr Cochrane’s evidence to be more credible and that he did not lose control of the motorcycle through any fault on his part.

A good result for the motorcyclist who was accused of losing control of his bike and injuring a car driver.

MACS will continue to represent bikers in order to defend their rights.

For more information on how we can help you in a Motorcycle Accident Claim, visit our Frequently Asked Questions.